Current Song:
Next Song:
Update Required To play the media you will need to either update your browser to a recent version or update your Flash plugin.
Homepage > Festival Films 2022 > Azar, 7 am

On a rainy night, Ashkan sees Hanieh and Raha in a taxi, who is not feeling well. Raha leaves her mobile phone in the taxi by accident and tries to get it back. Ashkan invites Haniyeh to come to their house near Maryam, Ashkan’s fiancé. Maryam sees the girls in their house and starts questioning but the girls have a secret that involves all of them leading to a series of complicated events. 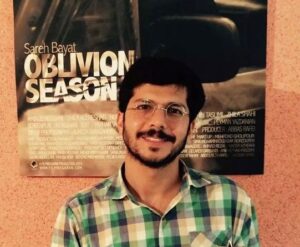 Masoud Farjam was born in 1987 in Tehran, Iran. As a child, he became interested in acting and theater and he started his activity in school and made his first short film at the age of fourteen, He graduated in illustration and continued his activity in cinema.

For the first time in Iranian cinema, he received numerous international awards in the film trailer category, He continued his professional career by editing movies and wrote and directed his first feature film Azar, 7 am.