The story of an Afghan woman with a little baby and a group of human smugglers who attempt to cross the Iranian border towards Europe but since she does not have enough money to pay the fare for herself and her child, she is forced to hide her baby in a bag. In the middle of the way, however, the baby makes noise and the smugglers notice her presence in the woman’s bag. They throw the woman out of the car but at the woman’s wailing and begging, they give her one hour to come up with the travel fare for her baby, before it gets dark. As the woman is unable to come up with the money, she makes another decision. She abandons the baby on the street in a border town. 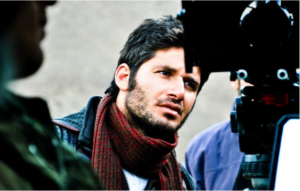 Mosayeb Hanaie was born in 1986 in Shiraz (Iran). He holds a BA. In cinema (directing) from Sooreh Art University in Tehran and M.A in cinema from Iran Broadcasting University. He began his activities in making short films from 2010 with a movie called “Anything Unimportant” and has made 3 movies (2 fiction and 1 documentary) so far. He has won several prizes for them.