The Dead Are Selfish

“The Dead Are Selfish” is based on a robotic and human ideas. This video was made at an old caravanserai of the Sassanid era in Iran. In the following we will see that a chair is dancing with a veil woman. A dance for the dead or maybe even the living!

She’s seated in the chair that belonged to someone who is no longer there. Or maybe it belonged to some others who are longer there. Or perhaps it was even her own — she’s also not there anymore. She is so surrounded by robots and machines that she is no longer really living. Seated, she’s clothed and veiled in a uniform of banality. The chair itself is a seat of banality and an accomplice of the machines and the robots. The world is in the hands of the machines and the robots and the heroes have all died. Fragments of machines, on deconstructed fragments of a piano, play deformed melodies. It seems as though the rhythm and tune of life is in their hands. And a fragment of a poem by Angel Gonzalez is sung repeatedly in the background: “the bad thing about the dead is that there is no way you can kill them.”

All of this takes place within Deir-e Gachin — the mother of Iran’s ancient caravansarai, which from the time of the Sassanid dynasty has been a stopping point, a place people arrive, but where they never stay. 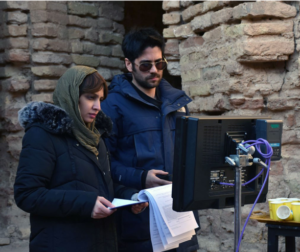 Bamdad Afshar was born in 1986 in Tehran, MA in music, graduated from Tehran University of Art and Architecture. His music mentor was Mehrnaz Maalekian. He has made many works in composing and sound designing for movies and theater in Iran and overseas and has cooperated with many artists like Hooshyar Khayyam, Hossein Alizadeh, Homayoun Shajarian, AmirReza Koohestani, Atila Pesyani, Houman Seyyedi, Poorya Alemi. He teaches at postgraduate in Tehran University of Fine Arts and undergraduate in Tehran University of Art and Architecture. He has been studying about the environmental sounds of Tehran. He is also active in robotics and making robots, sound art and electronic music that most of them are done with making ideas and supervision in “Otagh” Band.

Maryam (Fatemeh) Sarjeh Peyma was born in 1985. She studied physics at the university and then in 2012 she started studying cinema. Maryam studied screenwriting from Nasser Taghvaee and Asghar Farhadi, filmmaking from Shahram Mokri and Majid Barzegar, Dramaturgy of documentary film by Ali Razi, while she worked as an interdisciplinary cultural institute (Baharan School)  as educational manager since 2015. She has made several short films since 2014: The Orange Sky, Grunge, Decay, Silence, The Beautiful City (a free adaptation of The Beautiful City by Asghar Farhadi) and others. She joined Otagh Band in 2018 to direct their music videos. She directed Two videos called “The Dead are Selfish” and “Rotenberg 03.09.1” and also two teasers: “Pareto” and “Emptiness.”