Current Song:
Next Song:
Update Required To play the media you will need to either update your browser to a recent version or update your Flash plugin.
Homepage > Festival Films 2020 > We Are All Together

We Are All Together

After some unsuccessful attempts to save a bankrupt airline, the owner needs to gather some suicidal individuals to go according to her new plan. But due to an incident, everything turns out completely different.

Screening with: The Sixth Unit 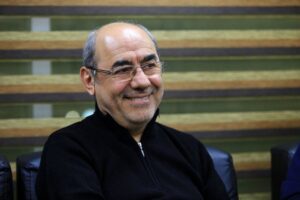 Born in 1957 in Tehran, Kamal Tabrizi is internationally best-known for his MATERNAL LOVE which won many prestigious awards in Berlin, Cairo, Montreal, Zlin, Seoul, etc. A graduate of cinema from the College of Cinema and Theatre of Arts University, Tabrizi began his film career as cinematographer, screenwriter, editor, and director of short films in 1979. Tabrizi directed his debut feature, THE PASSAGE, in 1988, but his LEILY IS WITH ME established him as a successful cineaste in the national scene. He also made some TV series – i.e. LEILY IS WITH ME and THE AGE OF REBELLION. His groundbreaking venture, THE LIZARD, was a domestic box-office hit and received the audience award in Fajr and the best Asian film award in Montreal 2004. In 2005, Tabrizi made A PIECE OF BREAD which brought him the best director award from the Spiritual section of Fajr International Film Festival. In 2008, he presented two crowd-pleasers: THERE’S ALWAYS A WOMAN which won an Audience Award at Fajr 2008, and TV Series SHAHRIAR, a portrayal of a contemporary poet, which marked a successful attempt in Iranian television.