Current Song:
Next Song:
Update Required To play the media you will need to either update your browser to a recent version or update your Flash plugin.
Homepage > Festival Films 2021 > Domino

Despite many disagreements between Yalda and her husband, she tries to maintain their relationship because of her fears. But their differences are increasing, and they are not compatible anymore and this causes their divorce. Because of family pressures and social judgments, Yalda keeps herself aloof from her relatives and hides her divorce. Home is no longer safe, and her family does not appreciate the pressure she is under. She extends her relationship with Hamed one of her classmates. As usual, marriage is her relationship purpose. But Hamed has another idea. Their interactions change both. Now Yalda is another person with another personality.

Screening with: A Simple Examination + Flasher 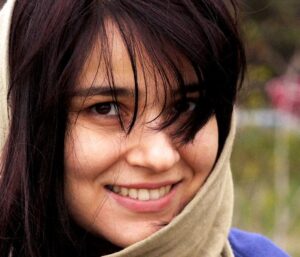 Laleh Barzegar, born 1980 in Tehran-Iran. After taking a film directing course in 1998 and making her first short films, she entered the Sureh Art University in 2000 and completed her bachelor studies in film directing in 2005. From 2005 to 2008 alongside directing she worked as an educator and was teaching pictorial composition in cinema in the Iranian Youth Cinema Society in Tehran. In 2009 she published a book of her short stories entitled Lovely Woman. She has been a member of the Iranian Short Film Association (ISFA) since 2007. Between 2010 to 2011 she worked as one of the jury members of the Iranian House of Cinema Film Festival. In 2011 she went to Germany to continue her education. She could enter the Academy of Media Arts Cologne and received her Diploma in film directing in 2015. As the member of ISFA she was in jury of the Tehran International Short Film Festival 2017. Moreover, she is painter and has participated in some collective art exhibitions and has had two individual exhibitions since 2008. She also has attended many international short film festivals such as Uppsala, Busan, Dresden etc., since 2007.

Domino is a German-Iranian film co-production which she directed as her first feature film in Iran. It had its premiere at Hof International Film Festival being nominated for the Hof Gold Award and German Cinema New Talent Award. Domino also received the Audience Award for Best Bremen Film (2021).