Current Song:
Next Song:
Update Required To play the media you will need to either update your browser to a recent version or update your Flash plugin.
Homepage > Festival Films 2020 > Sahara Flow

Glistening waves softly lap the shore behind a tall figure masked in mirrors. Four young women – striking in their diverse serenity – traverse a verdant forest. And a warrior of peace – armed with a sacred sword – goes forth. This is the world conjured up by director Katya Abedian and rapper/producer Sam Turpin in ‘Sahara Flow’. ‘This short film piece is an impressionistic ode to self-inspection, divine purpose, and faith in the enchanted. It paints a vision of a futuristic reality that is balanced, anchored, and guided by the forces of the natural and spiritual worlds. The narrative is abstractly assembled by the idea that our individual and collective navigations have never been confined to this Earth or its rendering of reality. It tracks the soul’s journey through multiple seasons and phases of life, watched over by angelic spirits. These entities are embodied as divine feminine figures (the anima), radiating the higher wisdom that there is no beginning nor end, only greater depths and stages of learning, understanding and sensitivity. The message is: our path as humans is illuminated by unseen forces and it is our duty to listen to their voices and follow their directions, with an open, fair, and honest mind. 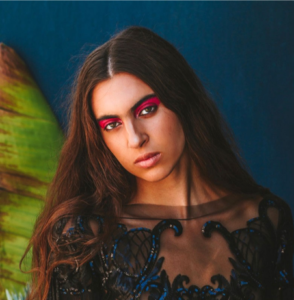 Katya Abedian is a South-African Iranian film director and photographer whose works are driven by a passion to shed light on stories of the human spirit and the power of resilience. Influenced by both South Africa’s socio-political atmosphere and the Baha’i community, Katya’s deep sense of the concept of “unity in diversity” is visible in her filmmaking and acclaimed photographic projects.

In April 2018 Katya’s directorial debut, a short film titled, Skin Diver, premiered in Cape Town, and has since been screened in Joburg, Barcelona, Paris and Cannes, as well as the Czech Republic and Ghana. Skin Diver was awarded Best South African Student Film at the Jozi Film Festival in 2018.